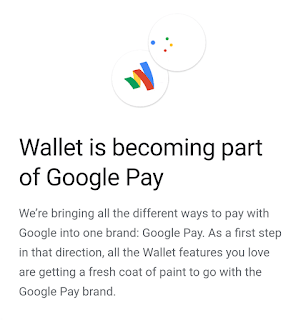 Google once again is about to confuse it's customers by sunsetting an app, and replacing it with another app for no reason.  Today Google sent out an email stating they will sunset Google Wallet and put it's features into Google Pay.  But don't confuse that with Android Pay which is still available, but probably will be rolled into Google Pay soon.

Google has a long history of replacing apps with new apps with new names rather than updating and improving existing apps with new features.  From what I can remember it started with Google buying a pseudo VoIP app called GrandCentral, and letting it remain unchanged for years before killing the app only to later revive the service as Google Voice.  Google Voice is a great service so I'm not knocking it, just pointing out how Google likes to change names for absolutely no reason.

Google has done the same thing with so many apps, it's honestly hard to keep track of them.  For example Google Talk (the original name for Google's chat service) was changed to Google Hangouts, but has duplicate services called Allo (text chat), and Duo (video chat) and they all do the same thing Google Talk did 10 years ago.

Hell, even Google formally changed its name to Alphabet

The world's most popular video streaming service YouTube now has YouTube, YouTube TV, and YouTube Red which are three difference services all under the same brand name.  Don't believe me?  Click the links to see for yourself.  One is the YouTube you know, another is an OTT streaming service, and the other is a Music and original content site.

Google Wallet used to be Google's answer to Apple Pay, Samsung Pay and any other tap to pay service people use with their phone.  But sometime in 2015, Google stripped Google Wallet of it's tap to pay features and created a new app called Android Pay.  Google Wallet remained an app but was only used to transfer money between people.

Android Pay took on all of the tap to pay features, loyalty cards and was pushed to the forefront as Google's "payment" app.  Fast forward to 2018, and Google has formally stated they will replace Google Wallet and will eventually rename Android Pay with a single app called Google Pay.

Now that you are thoroughly confused, Google wants you to know they are going to scrap Google Wallet, and Android Pay and put those services back into one app and call it Google Pay.

One of the biggest companies in the world, and they can't seem to pick a name and stick with it for a few years.  Every new feature means another new and confusing app.  Thanks Google!