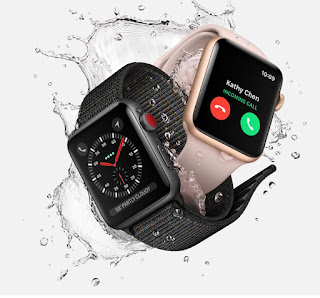 Apple’s newest toy, Apple Watch Series 3 is set to be released Friday, 22 September, but those with review units noticed some bugs with the new watch. Lauren Goode from the Verge has one of those review units, and already had the watch replaced due to connectivity issues with LTE.  The replacement unit is still experiencing the same connectivity issues.

LTE is the newest feature for Apple Watch 3 and it’s causing some problems with the watch. The watch is failing to properly switch over to LTE when switching between connections and connecting to random unknown Wi-Fi hotspots whether they have connection to the internet or not.
If you have your phone setup to notify you when Wi-Fi hotspots are available, you’ll notice when in public, your phone will alert you often that there is a new hotspot available. Some of these hotspots are public free Wi-Fi, others are secured networks that you’d need a password to connect to. The Series 3 watch is attempting to connect to these Wi-Fi sources regardless if it has the ability to connect to the internet or not. While connected to these unknown hotspots, the watch is failing to connect to cellular.
When Lauren reached out to Apple they gave an official statement acknowledging the issues. “We have discovered that when Apple Watch Series 3 joins unauthenticated Wi-Fi networks without connectivity, it may at times prevent the watch from using cellular. We are investigating a fix for a future software release.”
So there you have it folks. If you get the new Series 3 watch, know that it has some issues that are currently being worked out. In the meantime, enjoy your new watch.
Source: The Verge

Posted by Mobile Chaos at 9:16:00 AM
Email ThisBlogThis!Share to TwitterShare to FacebookShare to Pinterest
Labels: Apple, Apple Watch, News