Why you shouldn't buy the $400 iPhone SE 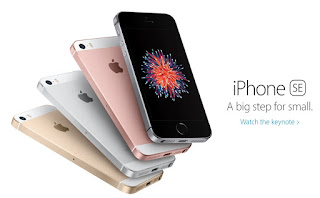 Apple recently announced the 4" iPhone SE and Apple finally has a phone that can be bought for a reasonable price.  At $400 the 16GB iPhone SE is in direct competition with the Nexus phones from Google, the Moto X, and the OnePlus phones.

Although the iPhone SE has modern specs, the phone is small.  4" phones haven't been a thing since about 2014 when even Apple realized that a 4" screen was too small.  Android phones have been coming in 5+ inch sizes since the original Samsung Note was considered big at 5.3" in 2011 and for the last 2 or 3 years, 5" phones seem to be the standard size.

Some people might find that bigger phones are cumbersome and just too big to handle, so the 4" iPhone makes sense.  The only problem with that is the entry 16GB is entirely too small in the modern era of phones.  Today, people use their phone for literally everything from the time they wake up and go to bed at night.

Because of the amount of use phones get, 16GB simply isn't enough space to store all of the media people tend to have on their phones.  When I say 16GB, understand that all 16GB isn't available to the user.  Only about 10GB of space is actually available for use since about 6GB is used for the operating system.

The average photo taken on a phone will be about 5MB, so your trip typical family trip to the zoo, taking 20 photos might take up 1% of your available space.  1% might not seem like a lot but we're talking one single 6 hour day of your life.  If you take a video of these events, you're probably talking about a 500MB file for just a few minutes of video, so one day might end up being closer to 10% of your total space.

After a summer of vacations, birthday parties, family moments, you can see how just pictures and videos can take up a lot of space and consume most of your 10GB of available space.

We haven't even talked about apps yet, so let's do that now

Even the most stringent of consumers will download around 30 or more apps.  There's time wasting games, social media apps, chat apps, apps to stream media, read, and so much more.

Apps are what makes a phone, and people tend to use whatever popular app is available for their phone.  Snapchat is a good example of a popular app that allows you to take pictures and videos and share them within their platform and across social media.  The catch is, if you want to use that video or picture on Facebook, you'll have to download it to your phone.  You can see where I'm going here, I'm talking about taking up more and more space on your 16GB phone.

Another good example of space hogging apps is any podcast app.  If you listen to podcasts you know that an audio only podcast is about 50MB.  If you choose to download the video version of that podcast you're probably talking about 200-300MB of data for an hour of viewing pleasure.  Anyone into podcasts will probably listen or watch multiple shows and you can see how this could eat all of your space pretty quickly.

In summary, the iPhone SE is honestly a good deal for what it is.  Just don't buy the $400 16GB version unless you like to delete apps, photos, videos and data once a month.  If you must choose a iPhone SE because you love the 4" size, the $500 64GB version is your only real option.

Hopefully 2016 is the year that 32GB becomes the base standard storage size for phones.  32GB seems to be the sweet spot in which users can have 5GB of apps, another 10GB of media and still have about 5-7GB of free space needed to shoot that 5 minute long video of your child opening birthday presents.
Posted by Mobile Chaos at 1:38:00 AM
Email ThisBlogThis!Share to TwitterShare to FacebookShare to Pinterest
Labels: Apple, Editorial, iPhone