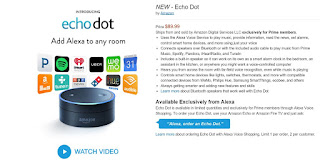 Amazon came out with the connected Echo speaker last year and it's meant to be a hub for your home similar to asking Siri or OK Google on your phone.  You can ask it for your schedule, the weather, turn off or on lights or even to play some music and it can respond to your requests with the built in speaker.  The only drawback is that it costs $179 which is a lot for a BT speaker if you don't factor in the voice command and home automation details.

Now, Amazon has come out with a way to get all of the features of the Echo without the cost of an Echo and it's called the echo dot for $89.

With the echo dot, you get all of the same home automation and voice control but without the speaker part.  It does have a speaker in it but it's only meant to respond to your voice commands.  So if you ask it what your schedule is, no problem.  If you ask it to order your pizza, no problem.  But, if you ask it to play your favorite band, it will need to be connected to some external speakers to complete that command.

The echo dot has the unidirectional microphones to pick up your voice no matter where you and all of the same features of the full size Echo, but it does not come with the full speaker as the bigger model does. 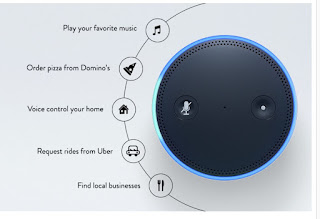 You can preorder the dot by going to this URL, but it won't ship until the end of march.

Is the echo dot for you?  I'd say so if you live in a smaller apartment and your main media center can cover your entire home.  Situations like this wouldn't benefit from the full size Echo since you probably won't listen to the Echo speaker if your media center speakers provide enough sound for your entire place.  Enter the dot which you connect to your media center and now you have the ideal smart speaker system. 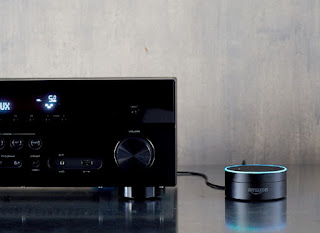 I think Amazon has a hit with the smaller smart speaker system that can adapt to homes in which a full size Echo just doesn't make sense.

You can check out both and buy them from these links if you're a Amazon Prime member:

Amazon Echo $179
Amazon echo dot $89  The dot doesn't have a pre-order link but you can add it to your wishlist from an iOS mobile device and then pre-order it from your wishlist.  Weird, I know, but it's the only way you can pre-order it right now.
Posted by Mobile Chaos at 12:18:00 AM
Email ThisBlogThis!Share to TwitterShare to FacebookShare to Pinterest
Labels: Amazon, Echo, News