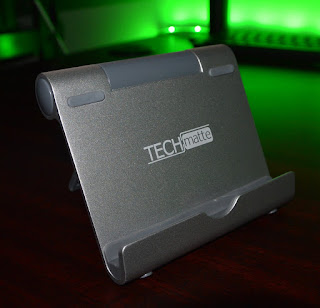 I'll start this review off by saying, if you consume a lot of video on your phone or tablet, you might want to pick up the TechMatte Stand

, it's really that good.
I used to use a cheap plastic business card holder as a cell phone stand at home and work when I wanted to stream videos while working.  Why?  Because they are cheap and usually cost less then a dollar and if it breaks who cares.  I even had a wire mesh version that only cost about $2.

The problem with this cheap solution is that you only get one view angle.  Depending on the brand you buy, it might lean too far back when viewing your phone/tablet while sitting at your desk.  If you get one with a more vertical angle. it might not be easy to watch ESPN during your morning shave.

Of course there are other options like cases that have integrated stands but then you're adding bulk to a device that you probably don't want bulk added to.

Enter the TechMatte stand that is totally awesome if you ask me.  It costs only $9 on Amazon

and its multi angle design means that it'll work in almost any situation.  Need your phone or tablet to stand more upright, there's an angle for that.  Need it laying more horizontally because your standing above your device?  There's an angle for that too.  There's angles for anything because the button on the edge of the hinge allows the plastic arm to swivel into almost any position because it swivels 270 degrees. 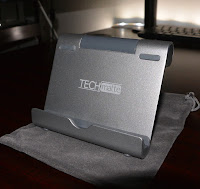 The stand also comes with a velvet like sack to carry it it and when folded flat it's a little less than an inch thick.  The compact folding size makes it a benefit over a cheaper options like the business card holders I mentioned.

It comes in two sizes, the one pictured and a larger XL version

(for $13) that is meant for use with larger 10" and bigger tablets.  My guess is that the version I purchased can hold almost any tablet.  But if you plan on doing a lot of touching and swiping, the larger version would come in handy as it would be more stable.  If you plan to prop up a phone or tablet at work and take in some streaming content, the smaller version should do fine.
Source:  Amazon 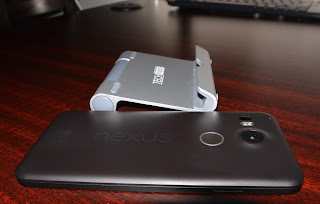 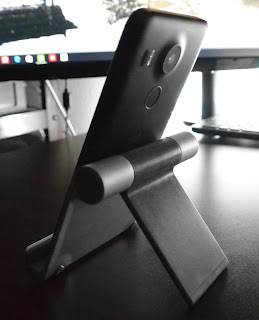 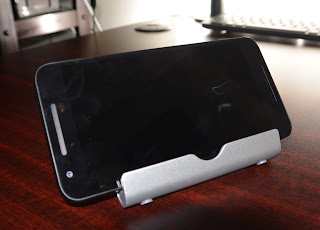 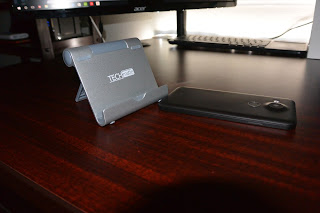 Posted by Mobile Chaos at 9:18:00 PM
Email ThisBlogThis!Share to TwitterShare to FacebookShare to Pinterest
Labels: Reviews