Android Wear on the LG G Watch One month later... 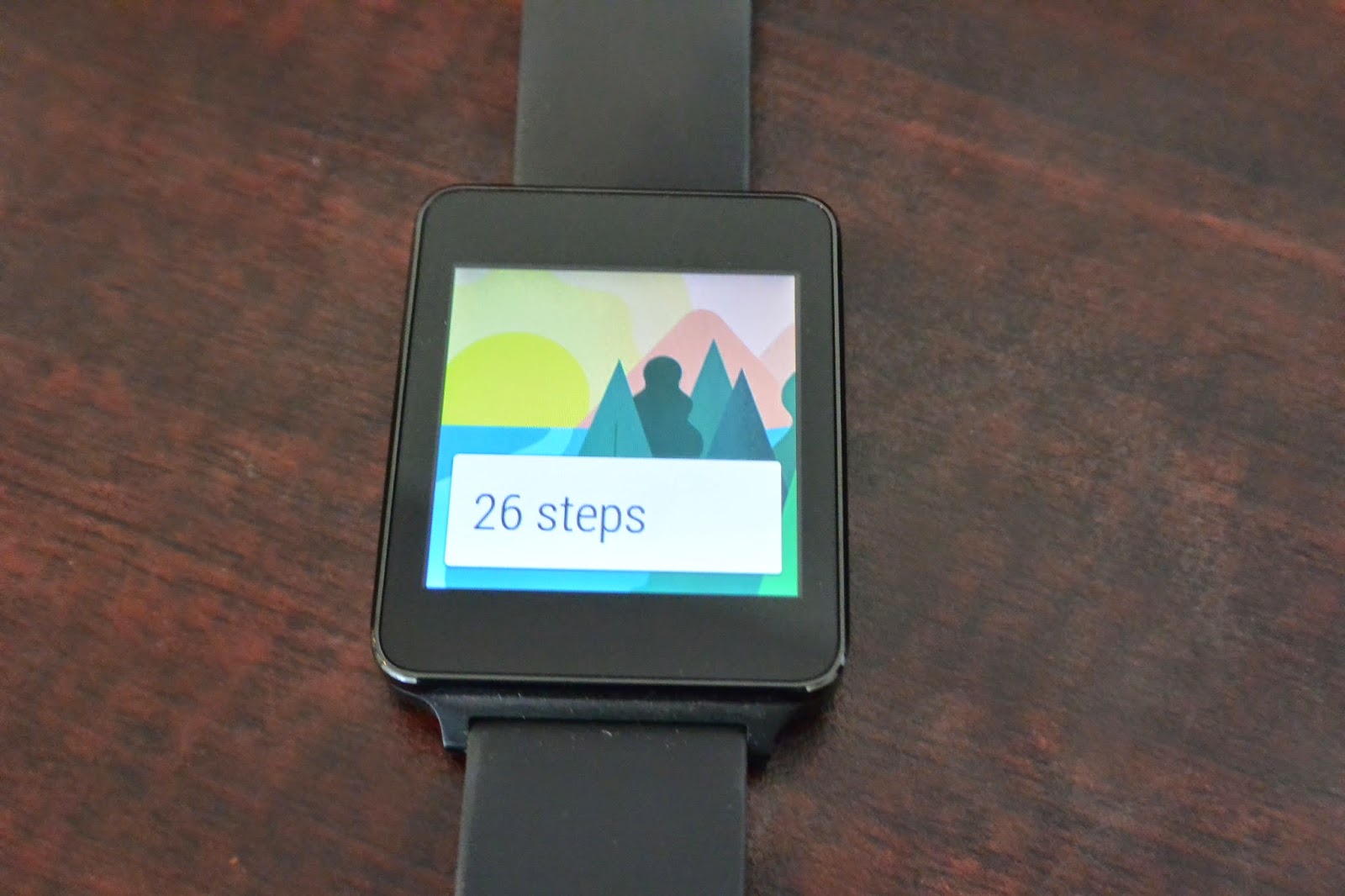 I purchased an LG G Watch running Android Gear so I could be on the front edge of wearable tech and be able to speak intelligently about Android smart watches.  After a month of wearing this watch almost daily I wanted to document my thoughts.


First off, the LG G Watch looks a lot like a Pebble Watch.  I’ve never owned a Pebble so I can’t compare the two in terms of performance, but I can say that the G Watch looks like a Pebble.  That being said, it is a big rectangle slapped on your wrist, but doesn’t feel too bulky when worn.

Secondly, connecting the G Watch to your phone is pretty simple.  Start the G Watch by putting it on a plugged in charging base and then download the Android Wear app from Google Play.  Once you do that, you’ll connect the watch to an Android phone.

The interface is pretty simple.  All you have to do is swipe up to switch between apps, swipe left to interface with those apps (which usually means opening up the app on your phone), or swipe right to dismiss the app.  You can change watch faces by long pressing on the watch face and out of the box there are 20 24 different types of watch faces you can use.  If you tap on the screen, the “OK Google” screen comes up where you can search by voice or swipe up to get to the menu items.  You can also just say, “OK Google” to get to the same screen but this only works when the screen is on.  If you have your display set to be always on, you will have move your arm so the screen wakes up or saying “OK Google” won’t work.  Swiping up gets you to all of the voice commands you could have said and also the settings and about screen.

You can use the voice commands to do things like take a note in Google Keep, show the pedometer, set a reminder, set an alarm, send a text or email and probably a bunch more.  Just tap the screen or say “OK Google” then tell it what you want it to do.

The watch itself is a simple black rectangle with rubber 22mm bands attached.  Since it is a standard 22mm size, the rubber band can be swapped with any universal metal, leather or rubber band.

After wearing the G Watch for a month I can say that it is most useful if you don’t like pulling out your phone every time you hear it beep.  Once your phone gets an email, text, Skype message, ESPN alert, IM or almost any other notification, the G Watch vibrates to let you know something is going on with your phone.  It’s very helpful since you don’t have to pull out your phone just to realize that you got some newsletter email that you always delete.

You will also get Google Now cards sent to your phone.  So when your Amazon package gets shipped, you’ll see it on your wrist before you pull out your phone.  Weather and traffic alerts, stock updates, basically anything that normally shows up in Google Now on your phone will now show up on your wrist too.  I found the most useful one to be the “time to home” card.  When it comes to the end of the work day, you can look at your wrist to see traffic is bad and it’s not a bad idea to hang out for another 30 minutes while traffic subdues.

If you search for directions on your phone, those directions will show up on the watch as well, giving you turn by turn navigation to something you are probably going to drive to but if you’re walking or biking, I can see being handy.

In summary, Android Wear watches are a 100% want to have item.  You don’t need them if your phone is always out of your pocket and on the table and the notifications on Android Wear can become a nuisance if you always keep your phone in our hand.

Does the G Watch stand out as something people will want to buy?  Probably not.  But it is a $229 entry into the Android Wear space which seems like the place to be at the moment.  The Windows rumored watch has been quiet the last few months and the Apple iWatch still is months away from announcement.  Cheap price (lower than the Moto 360 will probably enter the market) and the fact that you can swap the band to whatever you like makes the G Watch a buy at the moment.    As time goes on, app support will improve as well, making the G watch an even better buy.  The Moto 360 is the most talked about the Android Wear watch, but it’s not released yet and when it does come to market, it will probably cost around $300 or more.  The Moto 360 looks thicker than the G watch, but the round design and better watch faces make it look and feel like a real watch.  Are those two things worth an extra $75 or more?  Not in my eyes, but it might be worth the wait for you.