A week with a Chromebook as my only computer 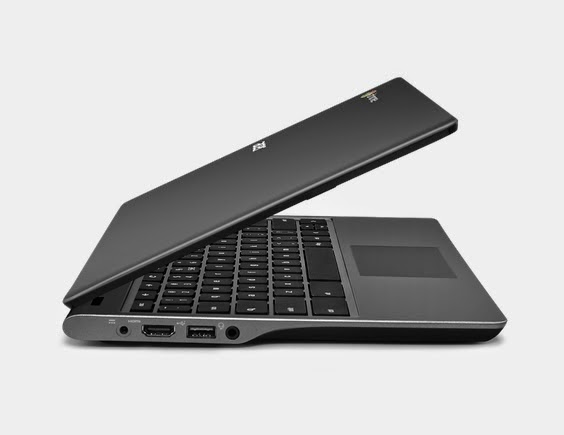 I purchased Acer C720P Chromebook a while ago just for fun and I finally got to test it out as my only computer for a week.  Since I’m a major tech geek, I knew going into it, there would be limitations on what I could I wanted to see if I could manage anyway.  I had 12 free inflight wifi sessions to use as well.  Here are my thoughts about Chromebooks and how they can fit into my life and the lives of everyday people.


I hopped on the plane and opened the Chromebook and wondered how easy it would to get my sessions.   was as simple connecting to the wifi and logging in with my google account.  Done and done.  It was seriously as simple as that.


I was able to connect to Facebook and update my status to the obligatory "I'm on my way home" and browse the internet.  I wasn't able to stream that was a restriction of rather than a limitation of the Chromebook.  I was able to connect to my and stream a video from there.  I didn’t bother to check the bandwidth I was getting but I know it wasn’t anything over 2-3Mbps because the video I was trying to stream kept buffering.
I was able to accomplish almost everything else I wanted to from the plane.   and Pandora both worked just fine as well as checking my RSS feeds through Feedly.  The only drawback I saw from the plane was the screen resolution and viewing angles on the Acer.  Basically, they suck.  There is no better way to put it.  The screen resolution is very low (1366x768) and you have to have the perfect viewing angle in order to see the screen very well.  Let's just say that you can't get to that perfect angle while traveling coach.  I may be spoiled since I normally use a MacBook Pro Retina as my daily computer, but even if I didn’t, the screen resolution on the Acer C720P is very poor.
Using a Chromebook on a plane works and it works well as long as you’re willing to contort your body into a good viewing angle of the screen.

After I arrived at my parents house, the Acer Chromebook worked just as I expected and allowed me to connect to my parents wifi and surf internet with no problems.  My brother asked me a few questions about Chromebooks and basically he wants to get one now.  As long as you don't have very many complex tasks you need to accomplish, a Chromebook will work just fine.
I decided to write this post Microsoft Word Online and try to chronicle how I'm using the Chromebook while on vacation and so far it's accomplished every task.  I took a bunch of pictures with my phone and they synced to and I was able to take them from there and post a status (with pictures) from the Chromebook.  I've been able to chat on Skype via the messenger apps embedded within Outlook.com as well.  I couldn't do group chat on Skype from Outlook.com but I was able to group chat from OneDrive.com.  I'm sure this is a limitation of Microsoft services rather than the Chromebook.

On my way back home from NJ, I basically had the flight from hell.  Delayed 2 ½ hours, packed plane and somehow the guy behind me stopped my seat from reclining while the lady in front of me seemed like she wanted to bounce from side to side until she found a comfortable sleeping position for 5 hours straight.   Nothing like being 6 tall and the person in front of you doing a full recline while seemingly wanting to jump around like a 3 year old kid.

While in this awkward position, the Chromebook did its job well.  I was going to stream a TV show from me but the connection wasn’t fast enough.  So instead I streamed for 5 straight hours with no issues.

I couldn’t get into a good typing or viewing position due to the lady in front of if I needed to, I could navigate to a website and type almost at a decent pace.  It wasn’t good, but I could have done it if I needed to.
In summary, I still have the same opinion of the Chromebook as I've had all along.  It's not your first it's the computer that 90% of people should probably own.  If job requires you to be behind a desk banging away on a keyboard all day, a Chromebook probably isn't for you.  But if you are just getting into computers or old enough that you only use a computer to check and the occasional email, you probably could use this computer as your daily driver.  If you a computer daily for work, the Chromebook still makes a nice coffee table computer that you can let your friends use when come over or if you need to quickly look up something while watching TV.  If you only need to check Facebook and email, these two tasks are easily accomplished on a Chromebook.  And if you have guests that want to do more than check Facebook or email, they probably have a decent smartphone or should have brought their own computer to your house.

The only major drawback I found with the Chromebook after a week of use was navigating web pages that ran lots of scripts.  If I opened more than 2 or 3 tabs in Chrome that were running HTML5, Flash, had lots of ads or anything like that, the browsing experience would come to a crawl.  If you use Facebook, you already know that Facebook likes to auto play videos in your timeline.  If you had a video playing on while opening up another web page that is also trying to display a video or ad, chances are that one of the two pages will crash or become barely useable.   Is this a show stopper? I don’t believe it is.  If you’re the type to surf Facebook, while clicking on a link that your friend posted, while looking up a recipe, while streaming music, you might be in for some trouble.  I’m not saying that it can’t be you won’t enjoy trying to make it work.