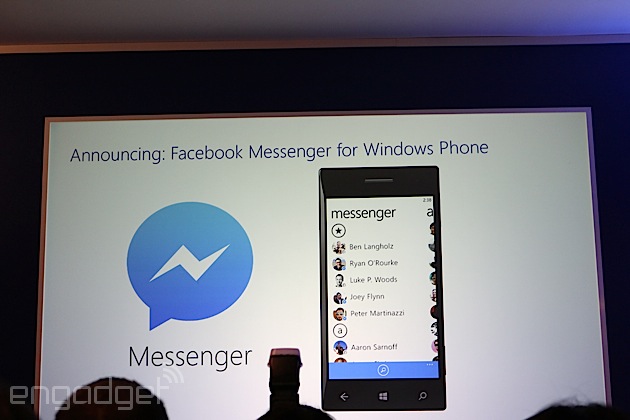 Facebook Messenger is already pretty well integrated into the messaging app on Windows Phone (WP) but now a stand alone app for Facebook Messenger has been announced.
The major benefit of having a stand alone app is the fact that you will be able to send and receive media and use the emoticons (stickers) that are popular on Facebook.  Currently, that is the one major drawback to using the WP messaging app for chatting on Facebook.  If someone sends you a sticker or pictures, you get a link instead of the image.  If you click the link, it will take you the web browser where you’ll see the mobile version of Facebook and the image you were sent.  It works, but it’s a cumbersome work around since it takes you the web instead of using the Facebook app.

The other way to currently use Facebook messenger on WIndows Phone is to open the Facebook app and navigate to messaging and then pin that to your home screen.  This method also works but isn’t the best solution either.

Source:  Engadget
Posted by Mobile Chaos at 10:48:00 AM
Email ThisBlogThis!Share to TwitterShare to FacebookShare to Pinterest
Labels: Facebook, Windows Phone