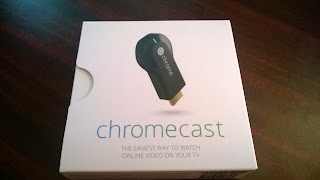 The $35 Chromecast is a killer device well worth your money if you have an open HDMI and USB port on your TV.

I've held off on purchasing the Chromecast this long for a few reasons.  First off, when the Chromecast was released, I was in the process of moving from South Korea to the United States and I knew I'd be without most of my tech devices for at least 60 days or more.  No need to buy a device that would take forever to get to Korea then only have the device be severely limited due to regional restrictions that all media has outside of the US.  Secondly, I already had an Apple TV that I needed to make use of once I got back.  I know the Chromecast is cheap and can definitely be considered an impulse buy but there was no need to duplicate a device I already owned and wanted to use unrestricted in the US.

Well, Black Friday rolls around around an I'm already spending tons of money buying gifts so why not add an on sale $30 Chromecast to one of my Amazon.com orders.

My device arrived today and I can see already that it's well worth the money.  Not only is it well worth the money because it costs the same as taking the kids to a fast food restaurant, but it's worth the money because you can send any tab from your Chrome browser to your TV.  Yes, that means you can send your Netflix, Hulu, HBO Go, Youtube, and any other streaming media site to your TV.  So in this sense, it acts just like a Roku or Apple TV device but it costs a $20 less than the cheapest Roku device and $70 cheaper than an Apple TV.  And the Roku devices don't support Youtube for some crazy reason.

The Chromecast app is available on Android, iOS, and Chrome browser so almost any device is supported with this device except for Windows Phone devices.  Full Windows computers are supported as they can run a Chrome browser.

Once you plug it in, change your input until you see the Chromecast that will have it's own name (that you can change later) and head to your computer or phone/tablet/ or computer to finish the setup.  You will be asked to download the chromecast app to complete the setup but it's all straightforward and simple to accomplish.

Once you have your Chromecast setup, just find what you want to stream on TV from your phone/tablet/ or computer and then tap the button and instantly your media is on your TV.

The Chromecast works almost like the Apple TV with Air Play but instead of being locked into one eco-system, you can use almost any desktop OS and almost any mobile OS as well.

In summary, if you are looking for a cheap way to turn your flat screen TV into a smart TV for as little as possible, the Chromecast is the device to own.  You don't have to pay $100 to get your streaming content on your TV or have to be locked into one eco-system.  If you can get the content on your phone/tablet/or TV, you can get it pushed to your Chromecast.