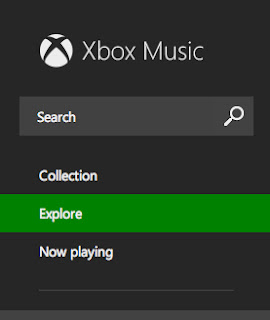 When you first get to the Xbox Music home page you are asked to sign in with a Microsoft account which can be your Hotmail, Live or Outlook email account that you may have signed up for on your Xbox console or to use email on the web.  If you don’t have one, head over to outlook.com and sign up.  I would suggest selecting an email address ending in @outlook.com as that is the most current Microsoft naming convention since Hotmail has been around since 1996 and now just sounds old. 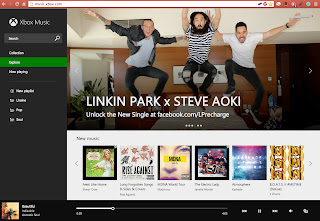 On the homepage you are greeted by a big scrolling pictures of featured artists.  I’ll assume that these pictures will rotate out and new artists release music.  At the bottom you will also see new albums that have been released.  You can click on either the large picture or the albums to be take to that artist’s home page on Xbox Music where you can see all of their albums or the individual album.  Hovering over the albums will allow you to start playing the whole album by using the play sign that appears or use the plus sign to add the album to a playlist or your collection.

Once you are signed in you have the ability to look at your your collect (located on the left under the Xbox Music logo) which is music that you own and have on your Windows Phone or Windows computer.  The works sort of like iTunes if you subscribe to iCloud and iTunes Match.  If you own it and it’s on your computer, it should show up here.

The explore section takes you back to the homepage I just described a few paragraphs earlier. 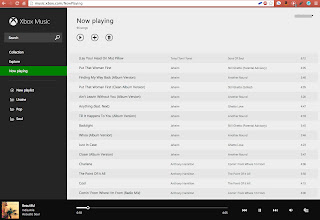 You can also click on the now playing link which will take you to the music you have playing now.  This could be an album or a playlist that you created.  Creating playlist is really simple and really only require you to hover over a song title or album and clicking the plus sign.  This will give you options to “add to now playing”, “add to collection”, or “add to new playlist”.  If you have already created playlists, they will show up at the bottom of the menu.  If you have no playlists created, it will have a popup that will allow you to name your new playlist. 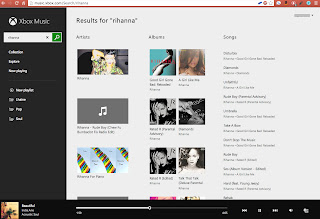 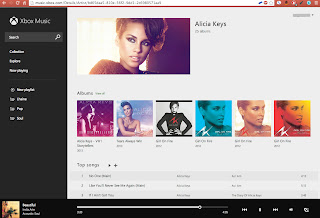 You can also search for artists using the search bar located on the left under the Xbox logo.  If you search for an artist, you will come to a page where you will see artists, albums and songs related to the search.  Clicking on the albums or songs works as mentioned before where you can play them immediately or add them to a playlist or now playing queue.  Clicking on the artist will get you to their page where you will find all of their albums, top songs, related artists and a short bio about the artist.


There you have it, that is almost everything about the new Xbox Music online streaming service.  I think the service is decent for just being released.  My few gripes about it are the fact that you can’t search by genre to find new music.  You have to almost know what song or artist you are looking for and you will find at the bottom of your search similar artists.  This accomplishes the same thing as searching by genre but I’d rather have a lists of top artists or top songs by genre.  Having a search feature like that will enable users to find music they probably wouldn’t have going the route they have now.  I think users would discover new artists or songs if they can see a trending song in the pop or soul genre and click it to hear the song.  Imagine a user looking under soul and seeing a song and thinking, “This song is #6 and I’ve never heard it.  Let me check that one out or at least add it to my queue.”  This is better music discovery if you ask me.

Also the home page is limited to only six top songs and six top albums.  This is very good information to have but six simply isn’t enough.  This is where a search by genre would also help a lot.  The new music section displays six albums but you are allowed to scroll to the right or left to find five more groups of six bringing the total to 30 top albums.  If you can find 30 top albums, why not a top 10 for each genre?  Seems like a key feature that is missing.

My last gripe is that there are no pre-configured playlists.  I know some people are dead set against someone else controlling their music but honestly, that’s how most people listen to music these days.  Almost every other streaming music service has pre-configured lists and Xbox Music should too.  At the very least a top 40 for each genre and some mood music would be nice.  If Microsoft doesn’t want to set up the playlists then they should allow user defined playlists be publicly available.  I’m sure many people wouldn’t mind sharing their preferred music in hopes of gaining followers.

Now for the costs of Xbox Music.  You can stream from the web as long as you are in the United States for free but after six months you will only get 10 free hours/month.  In order to get the benefits on your Windows Phone, Android device or iOS device, you will need to pay for music pass.  Music pass allows users one month free after which they will be charged $9.99/month for the service.  You can buy a 12 month subscription for $99 saving you about $20.  The costs seem a little high to me when you consider other music streaming services are free to use without limits.  Granted they all have ads about every two or three songs but listening to Flo from Progressive a few times an hour still seems cheaper than $100/year.
Posted by Mobile Chaos at 1:36:00 AM
Email ThisBlogThis!Share to TwitterShare to FacebookShare to Pinterest
Labels: Microsoft, Music, Reviews, Windows Phone 8, Xbox Music