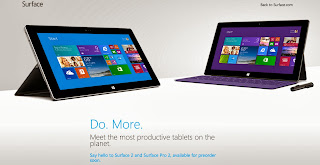 Microsoft held their Surface announcement today and here are some of the key points to take away from the event.

Surface 2
September 23, 2013
Surface 2 now features a silver magnesium body and is available in 32GB and 64GB configurations. Starting at US$499, Surface is powered by an NVIDIA Tegra 4 processor, making apps run faster and smoother and increasing battery life to up to 10 hours.
Image: Web | Print

Surface Pro 2
September 23, 2013
Starting at US$899 and weighing in at just two pounds, Surface Pro 2 is available in 64GB, 128GB, 256GB and 512GB (where available) versions, with either 4 GB or 8 GB of RAM. A 4th-generation Intel Core i5 processor provides incredibly fast performance and up to 75 percent longer battery life, so you can do more on a single charge.
Image: Web | Print

New, two-way kickstand design
September 23, 2013
Both Surface 2 models feature a sturdy new kickstand design with two positions, making Surface 2 and Surface Pro 2 more comfortable to use on your lap or at a desk.
Image: Web | Print

Type Cover 2
September 23, 2013
With Type Cover 2, the next-generation click-in keyboard for Surface, classic is now colorful with options of magenta, cyan, purple and black. The keyboard is backlit so you can work and play in any lighting condition with the same super-thin, lightweight design of the original Type Cover.
Image: Web | Print

Touch Cover 2
September 23, 2013
The cover you can type on just got better. With backlit keys, you can work and play in even more places — day or night.
Image: Web | Print

Arc Touch Mouse Surface Edition
September 23, 2013
Inspired by Surface, this special edition Arc Touch Mouse is perfect for life on the go. It’s comfortable, elegant and eye-catching, with a sleek design that allows for quick use and storage. Simply curve it to power on and flatten it to power off, and slip it into your pocket or bag as easily as a cell phone.
Image: Web | Print

Car Charger
September 23, 2013
Stuck in traffic between meetings? Power up and drive at the same time. Using Car Charger, charge up your Surface and another USB device while you’re on the go.
Image: Web | Print

The Surface Pro 2 now comes with 4th gen Haswell core i5 process and claims of 40% better battery life which means it should get about 8-9 hours.  With the power cover you should be able to get 12-13 hours of battery life.

Preorders will start on 24 September and the product will be released on 22 October.