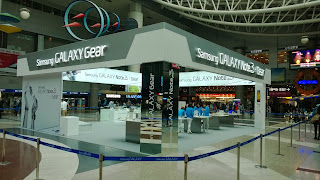 I happened to be in the Yongsan subway station today and stumbled onto a Samsung event showcasing the Note 3 and Gear watch.  I wish I was able to take more pics but I left the house with only 40% battery on my Nokia 925 and by the time I got back (6 hours later) and saw that they opened the gates, the phone was dead.

Anyway, here are my impressions of the Samsung Galaxy Note 3 and Galaxy Gear watch.

First thing to note (pun unintended) is that the Note 3 screen is huge!  The screen itself is about as big as my entire Nokia 925.  You can use this link to compare your phone to the Note 3. The phone doesn't feel that big in the hand.  It actually felt normal considering how much bigger it is than any other phone out there.  The phone is super thin and the faux leather back feels good to the touch.

The Galaxy Gear watch is a big watch.  The displays had some sort of charging/security thing attached to it but I saw some worn by Samsung people.  The watch isn't super thick but it is a big rectangle on your wrist.  The screen is pretty big as well for a watch.  I normally wear a Phosphor watch daily and it is a big watch that looks thick but it really isn't.  I would assume that wearing a Galaxy gear would be about the same as my Phosphor watch or maybe a little bigger but not much.

In summary, I will probably get the Note 3 as my next phone in 6 months (thanks to T-Mobile Jump plan).  If the Galaxy gear happens to be the right price, I might pick one of those up too.

Head over to Samsung.com for more info. 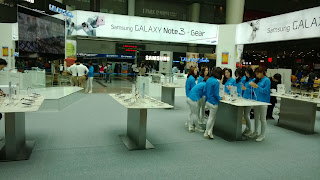 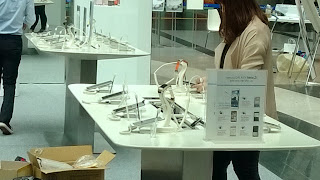 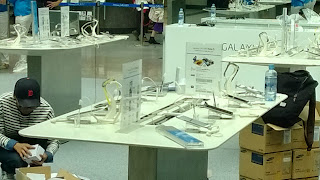 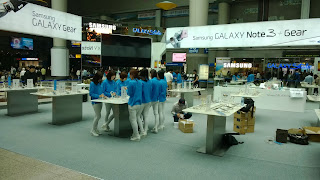 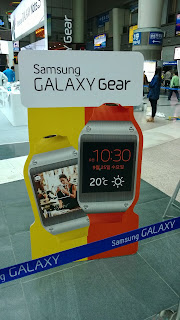 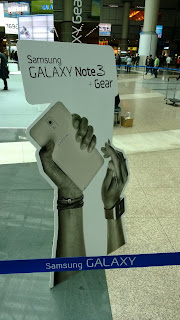 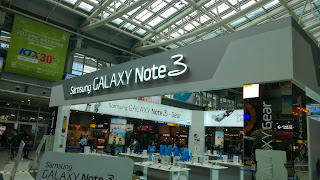 Posted by Mobile Chaos at 4:36:00 AM
Email ThisBlogThis!Share to TwitterShare to FacebookShare to Pinterest
Labels: Android, Galaxy., Note, Samsung