Microsoft has seriously stepped up its game 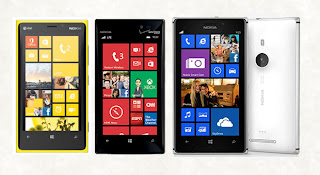 For about two years now Microsoft has been a player in the mobile phone market.  Not a big player, not even a serious competitor to Android or Apple but a decent 3rd option that has recently surpassed BlackBerry in the cell phone market.

The most recent flagship device from Microsoft and Nokia has been the Nokia 920.  It's a good phone with a great screen and wireless charging but the phone is big.  Not in a screen size sense of big but rather in a thickness sense of big.  Big phone with great specs but it can't compete with the latest and greatest Android offerings (the Samsung Galaxy S4 (SGS4) and HTC One) and Apple (iPhone 5) because of how big the phone was.

Well, today Nokia announced the Nokia 925 which will change everyone's mind in what they think of Windows phones.  This phone is as thin as a SGS4 but has a larger screen than the iPhone 5.  Same great specs as you would expect from any current device but this time, it's the same size as other current devices.

What Nokia needs to do now is win over markets like South Korea, China and Japan to get Windows Phone 8 into the hands of millions of people who are now stuck on Samsung and Apple devices.  Offer me the same great device in a similar sized package as the SGS4/iPhone 5 at a cheaper price??? Where do I sign up?

The bottom line is now Microsoft and Nokia are selling devices that can compete with Android and Apple in every segment of the market.  Before they had great hardware but less apps or a great device but in a form factor that is thicker than anything else out there.  the Nokia 925 seems to bring all of these winning elements into one phone and it looks like a winner.  There are still a few key apps (like instagram) that are missing from Windows Phone 8 but they will come as more people adopt the platform.