The Surface RT on the go 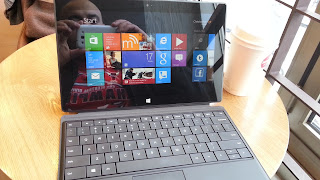 Today I decided to travel a bit with my Surface RT to see how useful it can be on the go doing stuff that I personally think the Surface RT is meant for.

I made up a reason to walk down to Itaewon and see if I could set up shop in a coffee shop to do a little blogging just to see how the experience is.  I know a lot of people hang out in coffee shops to surf the net, write papers, blog and many other things because they have a lot of free time, want to get out of the dorms or are unemployed and can appreciate interaction with people a lot better when the only other choice is staying at home by yourself. I can say that the experience of sitting here among other people (even if they aren't speaking English) is pleasant.  It gives me something to do other than just stare at my screen when I am trying to think about the next sentence.

It was easy enough to plan out how to make this trip.  I already had a messenger bag and a sleeve I purchased from Amazon to carry the Surface RT with Type Cover.  All I had to do was throw my hotspot in the bag as well as my wallet and phone and I was ready to go.  Sadly, my messenger bag is way too big to bring just my RT.  I normally use it to travel with as I think a messenger bag is better fort traveling than a backpack.  Looks like I will be looking for a smaller bag for situations like this.

After getting to the coffee shop I was able to get a seat by the window so I could get the full "coffee shop blogging experience".  The Surface fits nicely on the small table with plenty of room to still have space for my coffee and other things.  The Type Cover is easy to use and copying and pasting is easy since I can use standard Windows Ctrl+C, Ctrl+V keyboard shortcuts. Also the ability to highlight one item and hold the shift key while using the arrow keys to select multiple items is a benefit.

I only have two complaints about the experience so.  For some reason the Type Cover isn't registering my spacebar presses every single time.  There have been times when I'm typing and I have to go back and correct a sentence because two words don't have a space between them.  It only happens maybe 1 out of 50 times but it does in fact happen.  I know it's not my typing because I haven't changed my typing style and it works most of the time but there are a few times in which it doesn't.  Also the Surface wouldn't connect to a wifi point which I know is available.  I can see that this place has a different wifi router for every floor and my phone connects just fine to the 3rd floor connection.  For some reason the Surface will only see the 2nd floor router which causes me to get a weaker signal.  This is the reason why I brought my personal hotspot with me.  I knew there would be a freak chance that the coffee shop I found wouldn't have wifi or something wouldn't connect right.

In summary, the Surface RT excels in situations like this which I think it's designed for.  This tablet isn't meant to be used as a tablet first but rather as a pseudo computer in situations where using your phone wouldn't be ideal but you wouldn't want to lug around a laptop either.  I don't think an iPad or Android tablet would be the best in this situation either.  The iPad would lag behind because I am doing a lot of switching between apps to get pictures and links and everyone knows the iPad isn't good at switching apps quickly.  A 10" Android tablet would work but I don't know how well I'd be able to cut and paste in multiple locations.  I honestly don't cut and paste much on my phone and when I had a Samsung Galaxy 10.1, cutting and pasting wasn't the easiest to accomplish.  Also on the Surface I was able to have two browsers open at once.  I am blogging from the desktop version of IE and surfing and getting links from the Modern UI version of IE.  This is ideal when using multiple accounts which need to be open at the same time.


Anyway, the Surface is getting a 9 out of 10 for use in this situation since I accomplished everything in this post on the Surface.  I did use my Galaxy S3 to take most of the pics.  The one picture from inside of the coffee shop was taken with the Surface rear camera. 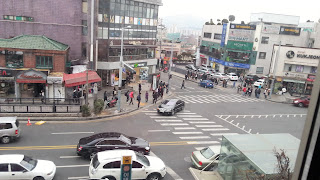 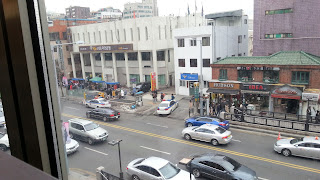 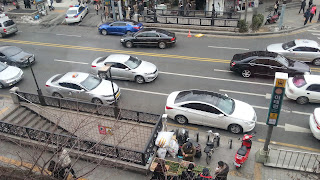 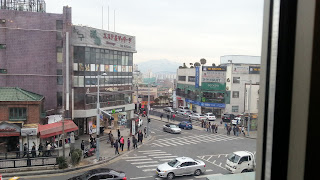 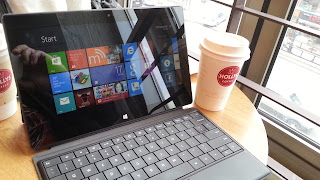 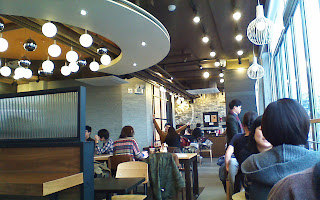