I purchased an iPad Mini 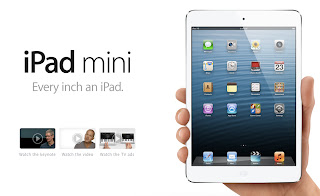 I know the first thought on many people's mind is why?  Why did I purchase yet another tablet?  Why another 7" tablet?  This is actually my 6th 7" tablet (Dell Streak 7, Lenovo A1, original Kindle Fire, Galaxy Tab 2 7.0, Nexus 7 and now iPad Mini) which means I've spent about $1250 on 7" tablets in the last 3 years.  The Dell streak was given to my former in-laws, Lenovo A1 was returned because it was defective causing me to buy the Kindle Fire refurbished for $139 and sold 2 months later on Craigslist for $125, GT2 7.0 was given away after I purchased the Nexus which I still have and now the iPad Mini.  Yes, I am a gadget fiend, I know this.  And telling your that I've owned 3 other 10" tablets as well doesn't make me look any better.  So now that all that is out of the way, Yes, I purchased an iPad Mini simply because I wanted an iOS toy to play with since my only other iOS toy is a 3 year old 2nd gen iPod Touch.

I had the opportunity to play with the iPad mini at my local Apple store in Itaewon, Seoul, S. Korea and that sealed the deal for getting one.  I already liked the idea of having an iOS toy to test all things iOS and have a product to compare to Android if the need ever came about.  Once I picked up the iPad Mini and held it, I knew I wanted it.  The design is sleek, it feels light in the hand and of course the build quality is great.  I think it's a bit too wide for most people to hold because I have what I would call normal size guy hands and I can barely hold it in one hand.  Yes, I'm a bigger guy but for some reason I was blessed with normal people's hands.  (I can't palm a men's size basketball.  I can can come close but I can't technically palm one unless it's new out of the box and still sticky to the touch to give you a good reference)  On my Nexus 7 I can hold it in portrait mode and get my thumb on one side and get all four fingers around the other side and have a good grip.  On the iPad mini, I can't quite get my pointer finger around the edge enough to to say I can grip it well with just two fingers but I can easily do this with my Nexus 7 even when in a case.

After playing with the iPad Mini for a few hours, I can say that iOS6 is still the same old OS that I had on my original iPad.  There's nothing special about it all.  Yes, there is the notification bar and the ability to quickly get to recently used apps but other than that, the only real noticeable difference is the presence of two cameras.  As I was browsing the App Store to find cool apps, the only ones I saw that were worth downloading were the same ones I already had on my Android devices.  Yes, most apps are better on iOS than they are on Android but it's still basically the same old apps.  One example of this is the Flipboard app.  On iOS, it seems to flow better and has a different layout than on Android.  It was simply easier to use if you ask me.  I guess I can chalk this up to the fact that app developers know exactly what screen sizes, processors and resolutions they are developing for with iOS but with Android, the apps have to suit multiple screen sizes, processors, resolutions, memory, etc so the app would have to be more vague to capture every device the app might be installed on.

Another thing I noticed which I didn't think I would care about (but do) is the screen resolution.  Its only 1024x768 and 163 pixels per inch (PPI) and it doesn't look all that great to be honest.  I know the Mini 2 will have a retina display and probably look awesome but right now, text looks like crap.   The Nexus 7 by comparison is 1280x800 and 216 ppi on a smaller screen and looks a lot better.  Looking at the same pics on Facebook on both devices, the difference was extremely noticeable.  Pics looked a lot better on the Nexus without question.  The smaller screen and poor pixel density not only are noticeable when reading text and looking at pics side by side next to the Nexus but it's also noticeable when trying to do stuff on the screen.  While downloading apps from the App Store, the little "x" in the corner of the box where you're supposed to be able to click to delete the word in the box so you can type another one was extremely hard to press.  It's so small and just doesn't seem like it's lined up right to the screen.  I tried hitting it at least 25 times and only managed to get it right once.  I gave up and just start touching right over top of the word and just deleting it by using the backspace key.

So the end state from my 4 hours with the iPad Mini are "Yay, it's the iPad 2 only smaller".  The truth is that the screen isn't on par with any current Android 7" device and it's the same old stale OS from 4 years ago.  On the plus side, the form factor and package that it's wrapped in is amazing.  Pics to follow. 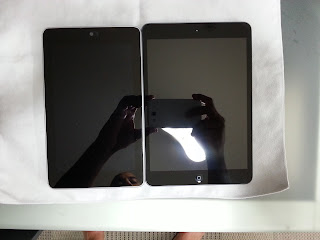 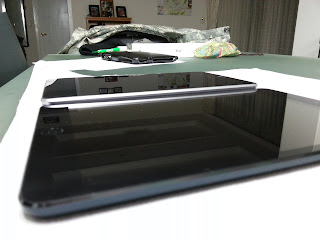 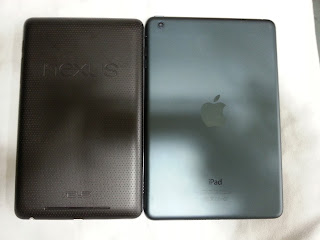 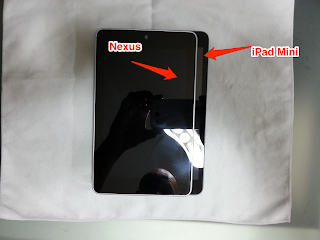 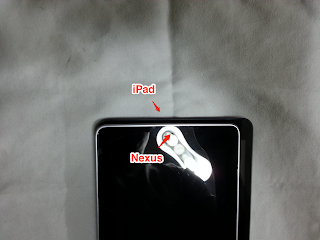 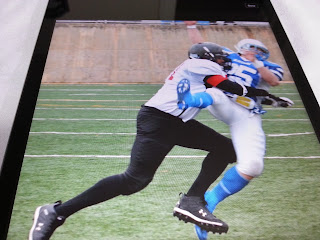 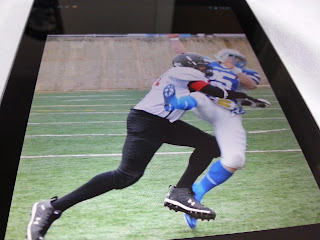