5 Reasons why I think Android is better than Windows Phone 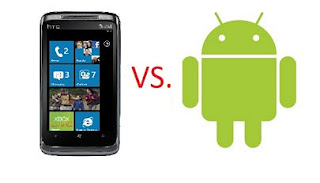 I have been using Android phones for almost 2 years now and I have become a big fan of the operating system.  I recently purchased a HD7 to test drive Windows Phone 7 (WP7) because I broke my LG G2x.  I gave the phone a good chance to win me over for a week and then for another week after the Mango update came out.  Ultimately, I felt as though WP7 was underwhelming in a few areas resulting in me going back to Android.  Keep reading as I list 5 reasons why I think Android is better than WP7.

Widgets
Customization is the biggest appeal for Android and widgets are a big factor of customization.  The ability to put any kind of widget on the home screen giving users instant access to information is simply amazing.  Widgets can be anything from weather, clocks, messaging, and social networking such as Twitter and Facebook.  Scrolling through home screens to get information is a lot better and faster than opening an application to see the same information.  I typically install a clock, weather, calendar, and tethering toggling widget as a first step when setting up any new Android phone.

Customization
The great thing about Android is that you can make your phone look and operate however you want it to.  Don’t like HTC Sense or Motoblur?  Download a launcher and change it to whatever you like.  Don’t like the way the stock messaging app looks or works?  Just download a new one.  Don’t like the stock keyboard?  Download one of the many on the market until you do find one you like.  Don’t like the bloatware that your carrier put on your phone?  Root your phone and put a new OS on it.  By now you get the point I’m trying to make.  You can change almost every aspect of your Android phone outside of the hardware.  You can even go as far as making your Android phone look and function almost the same as WP7 if you choose.

Android Market push apps
In my opinion Android Market sets the standard for mobile OS app markets.  I know that Apple’s App Store was the first available but from your computer you have to use iTunes to search and buy apps, then connect your phone to the computer to push the app to the phone.  Amazon’s App store is searchable from the web but it doesn’t push apps to your phone either.  Microsoft recently introduced its Marketplace which allows users to search for apps from the web but when you pick an app, it sends a link to your phone for you to click to go the the Zune Marketplace on your phone to download the app.  This is where Android Market excels.  If you search for an app from your computer on the Android Market, just click the install button and you can push the app to your phone.  The next time you pick up your Android phone, you will see that the app has downloaded and installed to your phone without any extra steps.  This allows you to use apps such as Plan B which can be crucial after you have lost your phone.

Plethora of apps
The amount of apps available for Android is simply staggering.  I know that iOS has more apps available but once you cut out the duplicate apps, crap apps and porn apps, the amount of apps available on Android is almost the same as what’s available for iOS.  Every major app developer creates apps for iOS first with an Android app quick to follow.  Windows Phone 7 has a lot of apps as well but since the operating system is so new, it is always a third option to developers.  I understand the argument that WP7 apps are being made at a faster rate than Android or iOS at this stage of existence but the tools to develop apps are more widely available now than they were 2-3 years ago when Android and iOS were at this stage.  Given another year WP7 will be close to on par with the other major 2 but as of right now, they are behind by a large margin.

SD Card support and tethering
I lumped these to points together because tethering is coming to the Windows Phone platform and some users don’t care about SD cards.  My Android phone has a 16gb micro SD card in it that I rarely take out of the phone, but I still think that SD card support is vital to phones. Sometimes I have to move large files to and from my phone and taking out the SD card and plugging that into my computer is the easiest way to do it.  I don’t want to have to upload files to a website, then download them to my phone or vice versa.  Sometimes simplicity is better and faster then using technology to perform the same tasks.  Secondly, with Android I have the ability to back up my files and data to my SD card.  This is extremely important when resetting a phone or switching to a new phone because all I have to do is restore the files from the SD card.

Tethering has been available on Android for almost 2 years and it is just now coming to Windows Phone.  The ability to tether was the reason why I originally switched back to my Android phone when I was testing out WP7.  I don’t have a Mifi and don’t want to pay $10/night for hotel wifi so tethering is essential to me.  Tethering is coming to WP7 with the next round of phones but its not currently available so that’s why I mentioned it.

Metro UI
Metro UI is the one area where I feel as though Windows Phone has an advantage over Android and iOS.  Granted I don’t like the large tile layout of the home screen or the long list of apps in the app drawer but almost every other aspect of Metro UI is amazing.  Menu flow and transitions between apps and screens is something to be seen.  I love the ability to swipe left and right to get to different parts of apps versus pressing the menu button then clicking another button.  The People Hub is another aspect of Metro UI that is pretty good as well.  This feature is replicated by many widgets on Android but it’s nice to see this feature integrated into the OS with WP7.

Summary
Windows Phone 7 is a quality operating system that performs its core functions equally as well as Android and iOS.  If WP7 allowed more customization and flexibility and had an app marketplace on par with Android and iOS, it would be hard to recommend either of the other two over WP7.
Posted by Mobile Chaos at 1:56:00 AM
Email ThisBlogThis!Share to TwitterShare to FacebookShare to Pinterest
Labels: Android, Reviews, WP7