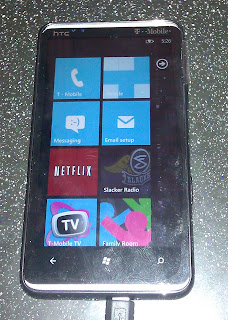 Today I decided to go by the mall and check out the new Window Phone 7 (WP7) phone for T-Mobile called the HD7 by HTC. I stopped by the T-Mobile store first thinking that they would have a few in stock and I could easily find a display model to play with. I was shocked (or not) to find out that they didn't have any HD7's in stock and the one they did have was dead. The T-Mobile rep that I've spoken to before and purchased my G2 from started bad mouthing the HD7 from the second I mentioned it. He mentioned how they would plug it in and charge it all night and it would be dead by lunch time. This wasn’t a very good start for WP7 if you ask me. He went on talking about how he didn't like the interface and how much he preferred Android over the HD7. He also mentioned how the micro SD card couldn't be changed and how he looked for a SD slot for about 20 minutes and finally just gave up on finding a way to swap SD cards. I didn't think the average consumer cared about swapping cards but I guess they do. After chatting with him for a bit while a customer sat there amazed and dumbfounded by the conversation we had, he told me to try the kiosk because they have the HD7 in stock. I asked him if they had any Galaxy Tabs available and he told me no. He mentioned something about the shipment being held up for this or that reason and they would be expecting them soon.

I went over to the T-Mobile kiosk in the mall to find the HD7 and see if it was what I thought it would be. They had a demo model on hand and sure enough, it was dead as well. Battery life seems to be a problem with WP7 or maybe just the HD7 by itself. Either way, it’s not looking good for the same phone to be dead at two different stores. I questioned if the WP7 interface would be enough for me before and my initial impression is just what I thought it would be. The home screen is plain and uneventful to say the least. It's just a bunch of blue tiles that have some animation on them but it lacks the feel or look of anything a person would want to play with just for fun. The rest of the UI was pleasant to the eye and seems cool to play with going between apps. The screen transitions were smooth as the screens seem to turn like a page of a book. Everything seemed smooth and it should feel smooth considering the OS is brand new and the phone had nothing but factory apps on it with zero customization. I would assume that WP7 phones as with all other phones would have minor hiccups or problems as more apps and customization is done to it. The basic colors used throughout the OS looked good to me. I checked out the calendar, contacts, internet explorer, media and other parts of the OS and they all used basic white font on a black screen. This is one aspect of the phone being "simple" that I liked and didn't have a problem with simple white on black color schemes. I didn't get to dig into contacts because the phone wasn't set up. The calendar was empty as well. The internet explorer was OK but didn't seem to be on par with Android or iOS phones from my few seconds playing with it. I was able to type out the classic, "the quick brown fox jumped over the lazy dog" within the messaging app and I was able to do it without any errors. The on screen correction seems to work pretty well because I know I misspelled "quick" while typing the message.

In summary, WP7 looks like a viable option in the mobile market. Do I think it will take the place of Android or iOS? Not even close. I don't think WP7 has a chance to take over BlackBerry either. I believe that WP7 will be a nice 4th option that gets things down without the flair of an iOS device or the customization of an Android phone. It's a simple UI that was meant to be nothing more than simple. It would make a great phone for someone who is new to smart phones or for a parent who wouldn't have a clue what Pandora is or thinks that Angry Birds is that pissed off Robin that attacks them every time they go to the mailbox.
Posted by Mobile Chaos at 4:43:00 PM
Email ThisBlogThis!Share to TwitterShare to FacebookShare to Pinterest
Labels: Reviews