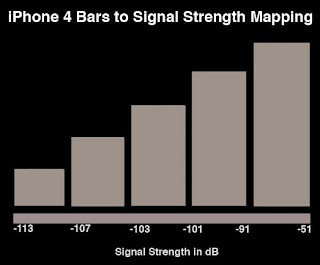 Over the long holiday weekend, Apple had a press release to acknowledge the iPhone 4 reception issues. By now everyone has seen many videos that show the new iPhone 4 losing bars and dropping phone calls when held by the bottom left corner. Apple finally sort of told the truth when they said that they were using the wrong formula to show how many bars of service you were getting on an iPhone. Basically Apple skewed the amount of bars showing on the iPhone fooling people into thinking they were getting better reception than they actually were. Apple states that you may be getting two less bars of signal than what's displayed on the phone. When you thought you had 5 bars, you really only had 3 bars worth of signal. And by the time your phone showed 3 bars (average reception) you were actually at only 1 bar of signal and actually had bad reception. Anandtech.com has a great article explaining the whole "less signal than actually displayed" dilemma with the iPhone. Apple also states that it will make bars 1 and 2 bigger so they can be seen better. I guess if you have a crappy signal, you will be able to see that more clearly from a distance.

In summary, Apple and Steve Jobs answer to your iPhone 4 receptions issues is that "your holding it wrong." and "you don't have the signal you think you do." AT&T has been taking it on the chin for years about its network and now after 4 iPhones, Apple finally says that it's their fault. It's kind of messed up that Apple would let AT&T take the hit for years, and it's really eye opening that AT&T allowed Apple to place blame on them for years without sticking up for themselves. Never the less, the iPhone 4 will be the best selling phone ever. Apple lemmings will follow Steve Jobs every word and the world will still move on. If you actually have a brain and can think for yourself, go by an Android phone or a Blackberry. I personally prefer Android but either one is better than being a mindless lemming.