Steve Jobs is a Pimp! 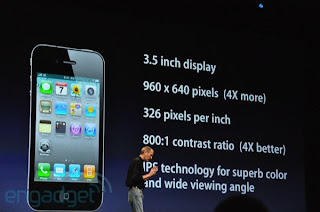 Steve Jobs is the pimp of all pimps. The iPhone 4 was introduced today as many of you may know and Jobs sold it as if he introduced the world to something new. Guess what people? The HTC EVO 4G is a better all around phone!

What exactly makes the EVO a phone? 8mp camera vs 5mp camera, WiFi tethering vs Bluetooth and cable tethering, Free open video chat over a cell network or WiFi vs iPhone to iPhone only video chat over WiFi only. The only feature the iPhone 4 has better is the screen, 960x640 vs 480x800. Will the common consumer notice? Probably not. Yay, finally one thing that's better.

The Sprint HTC EVO 4G is a better phone with all the same features (and some better ones) as the new iPhone but it's on a better network, open OS, all its features work on the cell network or WiFi and its cheaper.

Another note that some of you may not know. AT&T will force you to change your data plan and get you on the $5 cheaper 2GB data plan and then make you pay another $20 to tether. With the HTC EVO 4G, you can root and tether for free with UNLIMITED data. You thought you were gonna keep your $30 data plan didn't you? You can keep the plan, just don't upgrade your phone. And don't stop your iPad $30 unlimited data plan either. Once you stop it, when you go back to sign up again, you'll only have the option of 200mb for $15 or 2gb for $25.

Thank you Steve Jobs! Now, I'll have to go another year hearing how your inferior product is better than anything on the market simply because it's made by Apple. Lemmings will shout and cheer how they have a great phone and excuse the fact that you can't make a phone call, email or text in any big city and get charged through the nose to use it. Thanks Asshole!
Posted by Mobile Chaos at 12:25:00 PM
Email ThisBlogThis!Share to TwitterShare to FacebookShare to Pinterest