The Kin is dead 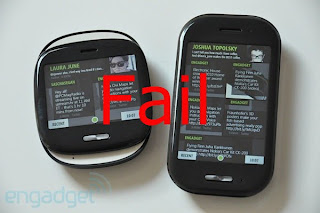 Microsoft's failed attempt of putting two lame phones into the the highly competitive cell phone market has failed. Microsoft tried to get people to buy two over priced, barely feature phones and get VZW to charge a premium as if they were full smart phones and they have failed. Why try to market a limited feature phone as a social networking phone and sell it as if it was a premium smart phone is beyond me. I'm glad the experiment is over.